He Died in Vain 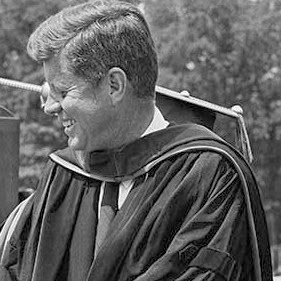 The bad guys won. They got away with it, covered their tracks and consolidated their power within the US government.

Was John F. Kennedy a threat to that power structure? You bet he was.

Was he a power-grubbing politician and a dangerous Cold Warrior himself? Of course he was, but one of the salient facts in the Crime of the Century is how rapidly he was changing towards the end of his short life.

His sins were mighty, and like all our presidents, his public image was a myth. But the JFK who the world saw in the fall of 1963 was very different from the one who took office in 1961.

Both Khruschev and Kennedy were profoundly shaken by the Cuban Missile Crisis, and both men had to defy their military advisers to pull back from the brink. Let us remember the message Bobby Kennedy brought to Anatoly Dobrynin, in an effort to find a way out: "If the situation continues much longer, the President is not sure that the military will not overthrow him and seize power."

His enemies were not feckless losers, as defenders of the "double lone nut coincidence theory" would have you believe. The means, motive and opportunity belonged to well-dressed sociopaths in the halls of power, who had experience toppling governments and did not shrink from the use of lethal violence.

Lee Oswald did not have the power to change the president's motorcade route so it would wend its way past his window. Jack Ruby did not have the power to delay the prisoner's scheduled transfer until he was ready and in place. And whatever else you can say about magic bullets, grassy knolls and autopsy reports, the coincidence theorists have a high bar to clear when it comes to their extraordinary claims.

That would concern the details of Oswald's trip to Mexico City, where he was quite obviously impersonated by someone seeking to tie him to the KGB's assassination bureau – a few short months before the guns of November were sounded. If you don't know the details of this, you simply haven't done your homework. And if you can't explain that away, you shouldn't try to mock anyone who speaks of conspiracy theories.

But the mockery is not in short supply. Critics of the absurd Warren Commission hypothesis are routinely conflated with those who believe the moon landing was faked, Elvis is alive somewhere, and a race of grey-skinned alien lizard people secretly rule the earth. The reasoning is that since wacky people believe wacky stuff, that means no powerful groups have ever conspired to seize or maintain power.

I expected a torrent of lone-nutter bullshit around this anniversary, as previous milestone years treated us to portentous "debunkings" of the deluded conspiracists. Well-publicized tomes like Posner's and Bugliosi's were treated to hosannahs in the mainstream media, while their lapses and calculated omissions were ignored. Anniversary specials on TV routinely advance the daring claim that the Warren Commissioners actually got it right after all. Meanwhile, serious scholars and researchers are simply ignored, when they're not being compared to a cargo cult.

The most common twist this year is a kind of smug armchair psychoanalysis of the "conspiratorial mindset." Such folks just have a deep need to explain away complex historical events with a simplistic "good vs. evil" explanation, unable to face up to the truth that coincidences sometimes happen.

I think there is a good deal of projection involved here. The research community is fully cognizant of the complexity of the hall of mirrors that constitutes the historical record of the greatest murder mystery of all time. It's the coincidence theorists who seem to yearn for closure. Perhaps they simply have a psychological need not to question the self-serving confabulations of the cover-up.

Or maybe they just like being on the side of the winners.

The most disheartening line comes from those who urge us to put this all behind us, because there's nothing more we can learn about it, and it wouldn't matter even if we could. But we're talking about one of the major pivot points of our history – and just like WWII and the Civil War, we live with its effects every day.

The murder of JFK ratified the worldview of his killers. It was the paradigm Ike tried to warn us against. It was what Harry Truman recoiled from, when he cautioned, shortly after the events in Dallas, of the possibility of an American Gestapo, and the rise of a "right wing totalitarian country."

And now? We're marinating in it. The Global Corporate Empire pretty much gets its way, and no president will ever challenge it – the way JFK challenged the bankers, the oil companies, the steel magnates, or the military. Now, presidents look over their shoulders, knowing there are lines they will not cross – if it even occurs to them to cross them in the first place.

Now we live in a permanent wartime economy, and Wall Street screws us all with impunity. The war on poverty has been replaced by a war on the poor. John Mitchell warned us that this country would be going so far to the right, we wouldn't recognize it anymore. And he was right. I don't recognize the country I was born into.

Jack Kennedy died in vain. The ideals he stood for, the lessons he learned, were all for naught. That is, unless the rest of us learn them, too. However flawed a person he was, however hyped his myth, he really did inspire millions to work for a better world. What's most important about his life is just this: He evolved, and that's his real legacy. So maybe we can, too.
Posted by MZepezauer at 8:14 PM