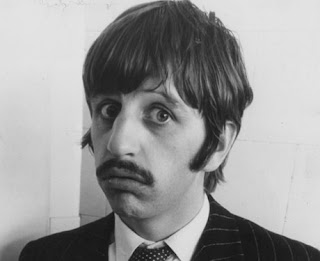 As reported here, among other places, today marks the 50th anniversary of Richard Starkey's first gig with the Beatles. A lot of attention was paid to the Stones recently having hit the half-century mark, and due commemoration was paid to that band's first-ever gig. But according to Keith Richards, that date does't really count; the Stones weren't really the Stones for him until Charlie Watts became their drummer (on an unknown date in January of 1963).

Likewise, while history was made the day John met Paul, the Beatles weren't really the Beatles as we know them until Ringo sat behind them at the drum kit that 18th of August in 1962. Ringo's personality, his affable singing voice, and his studied avoidance of instrumental ostentation helped cement the Beatles sound and laid the foundations for their success.

According to Mark Lewisohn's definitive Complete Beatles Chronicle, the gig began shortly after 10pm, (afetr a two-hour rehearsal) at Hulme Hall in Birkenhead, in celebration of the local Horticultural Society's 17th anniversary. And according to John Lennon, while the Beatles might have made it without Ringo, it's also probable that Ringo would have made it without the Baetles (though maybe not quite so far):


Ringo was a star in his own right in Liverpool before we even met. He was a professional drummer who sang and performed and had Ringo Starr-time and he was in one of the top groups in Britain but especially in Liverpool before we even had a drummer. So Ringo's talent would have come out one way or the other as something or other. I don't know what he would have ended up as, but whatever that spark is in Ringo that we all know but can't put our finger on — whether it is acting, drumming or singing I don't know — there is something in him that is projectable and he would have surfaced with or without the Beatles. Ringo is a damn good drummer.

Ringo's drumming is often underrated and occasionally denigrated, but listen to his work on "Rain" and "Tomorrow Never Knows," to cite a couple out of many outstanding examples. Moreover, most Beatles songs didn't call for the kind of drumming that Watts or Keith Moon excelled at. It's true that Ringo's solo career served up a number of cringe-worthy moments (as did his colleagues', in smaller ratios), along with some nice pop ear candy. But since sobering up, Ringo has taken his songwriting and recording work more seriously, and has delivered credible efforts in the latter years. So, for instance, give a try to this collaboration with Eric Clapton, a tribute to their mutual pal George. And a happy Ringoversary to you!