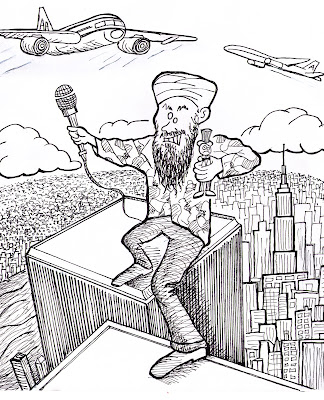 Copies of the "Fully Revised and Updated Second Edition" of The CIA's Greatest Hits should be coming to a bookstore near you this week. If they aren't, ask them why not.

I'll be doing a west coast tour to promote the book this summer, and let me know if there's a bookstore or radio station near you that would like to host me. Here in Tucson I'll be doing a book signing on my birthday, May 25, at Revolutionary Grounds Coffeehouse on 4th Avenue. Stay tuned for future details.

Unlike the 1994 edition, this one is also available as an ebook if you prefer - though I haven't checked it out to see how the illustrations display. The newer cartoons tend to be much more detailed than the older ones, so I'm guessing a tablet or e-reader will work better than your phone if you want the full effect.

This time there will also be an online bibliography, with links to sources where available online. This will be an ongoing project, updated as warranted, but is still a work in progress as of this writing (April seems to have snuck up on me). So stay tuned for more linky goodness to come

This morning I stopped by the customer comment section at Amazon and found all sorts of people saying nice things about me, as well as a few angry critics. One in particular – just coincidentally from Langley, VA – grumbled "I'm sick of you bastards disrespecting the Agency. Come on, you don't know everything they do so just leave them be." Moved by his concern, I added the following comment:

Zepezauer here. I want to thank all the commenters, including my critics. In the introduction to the new edition, I note that my late father-in-law was a career CIA officer. I have nothing but respect for the men and women who risk their lives serving our country. My critique is about the policymakers who believe they can use the agency to "knock off little brown people on the cheap." as one of them put it (in chapter 4). And in the first edition, I also note that all nations need strong intelligence services. This is not book about what the CIA gets right. But as taxpayers and citizens, we have to be alert to fiascos, miscalculations and massacres done in our name, and try to learn from our mistakes. True patriotism requires no less.

Many thanks in advance to all who support this project.
Posted by MZepezauer at 6:53 AM