My Mother Writes to Ask 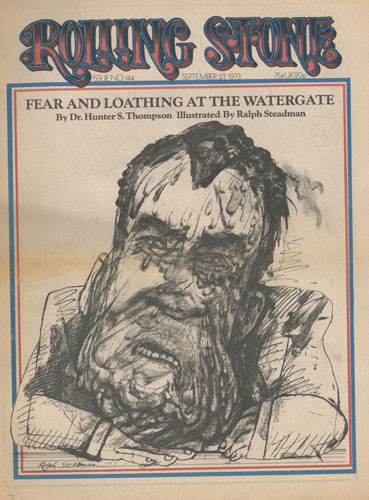 "Objective journalism is one of the main reasons why American politics has been allowed to be so corrupt for so long." -Hunter S. Thompson

Mark, what does this mean? please translate for me. thanks.

Hunter Thompson, of course, was anything but objective, not only memorably saturating his stories with his own turbocharged opinions, but, frequently, injecting himself into the events of the story. But he was also part of a larger movement among journalists who acknowledged that the writer inevitably colors the story with his or her own views, and so strove to be upfront about their stances, while still attempting to be as accurate as possible. This is more akin to the European style of journalism.

And as he stated in the interview from which that quote was taken:

The quote refers to Richard Nixon - the next line was "You can't be objective about Nixon." Elsewhere Thompson states that what he wrote about Nixon - specifically, that Nixon was a monster and a crook - was the truth. And that was his truth, as he saw it, which was obvious from everything he wrote about Nixon. But if another journalist's truth was that Nixon was a noble statesman, or that he was just another American politician and should be regarded as such, those truths, too, would be obvious from their writing, whether they tried to conceal it or not.

What Thompson is referring to is the longstanding trope in American journalism whereby the journalist strives to keep his or her own views from being perceived. Instead they speak to influential people from both parties and report what they say, giving each side equal weight.

This allows powerful people to spew pernicious nonsense if they so choose - and choose they do. By dutifully reporting their spin, ostensibly objective journalists become, as media critic David Barsamian put it, "stenographers to power."

The ultimate corruption arising from this format is the treatment of the global warming issue. Knowing that whatever they say would be treated as "one side" of an issue, the fossil fuel barons hired PR firms to churn out propaganda asserting that the planet was not warming, or that if it were, that humanity's industrial processes had nothing to do with it.

Because powerful people had a vested interest in preventing regulation of their pollution, they "threw sand in the umpire's eyes." This is akin to what the cigarette companies did for so many years before the Surgeon General's report of 1964, or how chemical firms managed to delay the removal of lead from our environment for more than thirty years after European governments had responded to this known neurotoxin.

This corruption allows a handful of people to become fabulously wealthy while dispersing the costs onto the public at large. In this case the costs are dispersed onto the global population, and onto my children's generation. And while these costs are literally incalculable, the scale of this crime makes the tobacco barons look like convenience store burglars.

As we watch our global climate wrenched into dysfunction, "famine and pestilence" only begins to describe the consequences. Given two decades of studied inaction on the issue, this century will now witness deaths and refugee flows in the hundreds of millions as entire agricultural systems collapse and tropical diseases spread into new populations. Wars over dwindling resources are inevitable, particularly over potable drinking water, as watersheds decline with the snowpack that feeds them.

Our political paralysis on this issue was bought and paid for - and paid for so well that both conservative voters and the politicians they elect have fallen into step with the industry line. Where just a few years ago, polls showed that voters understood the nature of the problem and wished for it to be dealt with, we now have large numbers of Republican voters denying the truth. Where just a few years ago Newt Gingrich and Mitt Romney agreed that climate change was real and should be addressed, now they sow doubt along with their donor base and decry any attempts to regulate carbon as a threat to free enterprise.

All this was made possible by objective journalists, who knew damn well that a handful of studies subsidized by the vested interests were contradicted by an overwhelming scientific consensus, but who nonetheless dutifully reported "both sides" of the issue. To do otherwise would not be objective, and moreover, would upset major advertisers.

Thompson was being explicit about the link between this style of corporate journalism and the corruption of our politics, and both trends have only accelerated in recent years. Journalistic enterprises have been more and more dominated by Wall Street interests dictating the bottom line, and politics, particularly since the Citizens United decision, have become more dependent on monied interests than ever. If he hadn't seen it all coming, Hunter Thompson would be flailing and thrashing in his uneasy grave.
Posted by MZepezauer at 6:49 AM